What a pleasant surprise I had last night! I just had to share it with you...

Bob and I were out at our favorite French Restaurant in Manhattan, Le Grenouille (3 East 52nd Street). No, this wasn't our romantic Valentine's Day dinner celebrated a day early. We were entertaining Kate Elton, the Director of Fiction at HarperCollins (UK). Kate had some business here in NYC and we decided to show her a nice evening, while chatting about the imminent UK launch of my new novel, Secrets From The Past (coming out Feb 28 in the UK and April 9 in North America). 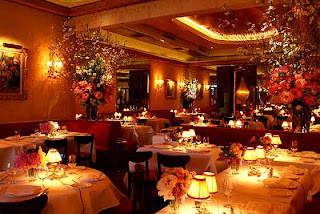 We were about to bite into our entrees, when from the corner of my eye, I spotted my dear friend, the eternally glamorous Joan Collins, dining on the other side of the restaurant. And sitting opposite Joan, her equally beautifully and talented sister, Jackie. Next to Joan was her charming husband, Percy Gibson. Not wishing to disturb their dinner, we elected not to head over to their table. Not yet, anyway. Besides, the Collins sisters hadn't yet noticed us on our side of the large room. Instead, I decided to have a little fun. I grabbed a sheet of paper from my purse and jotted down these words:" How fascinating to have three bestselling English authors under one roof in New York City."  Jackie, of course, is the author of 28 NY Times Bestselling novels (incidentally the same number that I've penned). Joan is much better known for her legendary role on TV's iconic series, Dynasty. However, Bob and I had most recently seen her in London at a book party for her autobiography, which too was a worldwide bestseller.

I waited a few moments to grab the attention of our waiter. Then I folded the piece of paper and had him deliver it to Joan & Jackie at their table. And then I watched in anticipation for a reaction. I was not disappointed. Joan unfolded the note and appeared to read it aloud to Jackie. She then began to look around the room for the sender. It took a few moments, but alas she spotted me. A delicious grin overtook her face. Joan raised her hand and waved to me in acknowledgement, followed by Jackie, who raised a glass in our direction. Later, on the way out, we shared a good laugh about the whole coincidence. No doubt, our dinner guest, Kate, must have felt a little star struck. And speaking of Le Grenouille, for thise seeking more info about this great restaurnt, here's a link to thier website: http://la-grenouille.com/about.html
You just never know who you might run into there...
Posted by Barbara Taylor Bradford at 12:50 PM