My Cherished Letter From Clementine Churchill 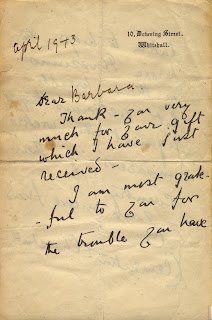 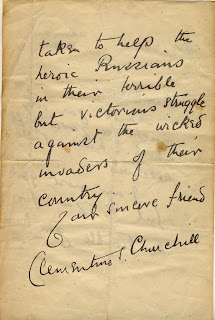 One of my most prized possessions throughout my life has been a handwritten letter sent to me by Clementine Churchill, wife of legendary British Prime Minister Winston Churchill. It's a treasure that I have hung onto and prominently displayed in my home for decades. I've recently loaned this special letter to a Churchill exhibition in New York City at the Morgan Library called: The Power Of The Word. The exhibit has been arranged by an organization called "Cambridge In America." I want to share with you all now the story behind this most extraordinary letter, and some details from the exhibit opening last night...

When I was growing up in Yorkshire during World War II, I wanted to do something to help the war effort. Encouraged by my parents, Winston and Freda Taylor, I held a jumble (garage) sale in my mother's garden. I invited school friends, teachers and relatives.
Small kitchen and household items, given to me by my mother, grandmother and aunts went on sale. At the end of the afternoon, everything had been sold for a few pennies each, but everyone was well pleased with the result.
I then wrote a latter to the wife of the Prime Minister, Mrs Clementine S. Churchill, and sent the money to her for her Aid to Russia Fund. Within days Mrs. Churchill wrote back to me thanking her. Can you imagine the lovely surprise for this little girl to get a personalized reply from the wife of the iconic Winston Churchill?
I have treasured that letter ever since. However, I wanted to ensure that this piece of history can be enjoyed by many more than those who visit my home. I've recently gifted it to Churchill College in Cambridge (UK) because I believe this is its rightful home. It will be delivered to the college at the conclusion of the exhibition at the Morgan Library.

On June 7th, 2012 I attended the private reception for the opening of Churchill: The Power Of The Word at the Morgan Library in Manhattan. Boris Johnson, London's colorful mayor, showed up full of good humor and clever comments. My husband, Bob, and I were surprised to see him and went over to chat. "Come and visit me, come to the London Olympics," he said. We promised to try.

Mayor Johnson was one of the evening's featured speakers. He made everyone chuckle. Also present were Sir Winston's two granddaughters, my redheaded friends Edwina Sandys, the well-known artist, and her sister Celia Sandys, the famous writer. I also spotted Andrew Roberts, the British historian and Churchill biographer, as well as lots of other New York and British notables. The exhibition is open to the public from June 8th until September. I found it very inspirational. 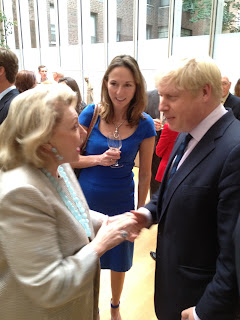 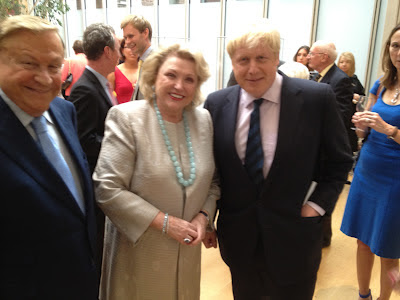 Posted by Barbara Taylor Bradford at 7:28 AM